A friend posted a picture of an "idroscalo" in Milan. The dictionary tells me that it means "seaplane base", which I understand is similar to a seaport. However, the photo was of a sculpture by a small lake. Are there other meanings of this word in common usage?

Idroscalo is the name of an artificial lake outside Milan. You can find info about it here: Idroscalo site

The confusion is justified, Idroscalo actually means "seaplanes base"; and behind Milan's Idroscalo there's a somewhat interesting story.

In the late twenties seaplanes were quite important in civilian airlines, and were thought by many as the future of aviation for Italy, also due to its strategic position on the Mediterranean sea; thus, a seaplane base was deemed important for Milan, which already was one of the most important cities in the North of Italy.

Works for the Idroscalo started in 1928, and it's still quite clear from the elongated shape of the lake that it was originally intended as a landing strip for seaplanes (although the usage for sea sports was planned from the beginning). 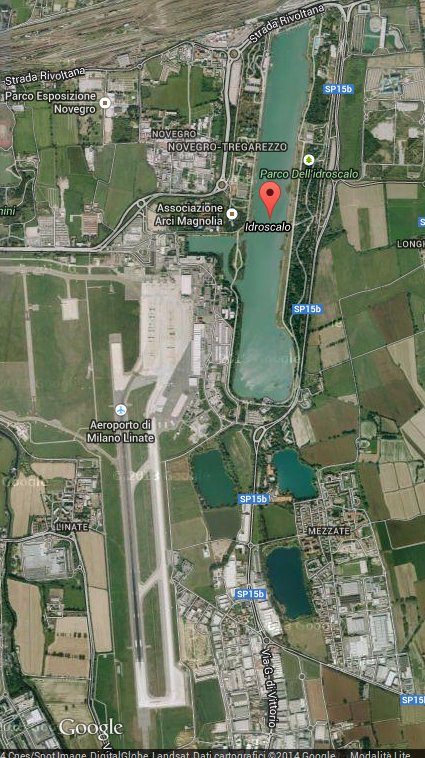 Even though (for once) the works for the actual digging finished quickly, the second part of the works (administrative buildings, hangars, ...) took much longer than expected (as always in Italy), and at the same time the lake started being used for sport events (rowing, swimming, ...).

So, while seaplanes usage started declining, the sport usage of the lake consolidated, especially after it hosted several important international rowing competitions. At the end, they finally gave up with the idea of an important seaport, and the Idroscalo was left for leisure and sports, as still is today.

Incidentally, in the photo above you can also see that, below the Idroscalo, there's an actual airport (Milano Linate AKA Aeoroporto Forlanini, IATA code MIL), built to replace the older Taliedo aviation camp. They decided to place it here when the Idroscalo was still considered a future sailplane base (1934), to build an integrated planes and seaplanes hub. Fortunately, unlike the Idroscalo, the Forlanini Airport was actually completed, and is still in use today.

10
"Al riguardo di" and "a riguardo di"
5
What does "fottitura" mean?
7
Any etymological relationship between the Italian "eh" and the (mostly Canadian) English "eh"?
3
What does "mezzocannone" mean?
5
Why are the definitions of "fottere" so biased towards the man?
5
What does “ventordici” mean?
5
What does the word "pizza" mean in Italian?
6
What does "cannelloni" mean?
3
Is maglietta a T-shirt, a shirt or a sweater?