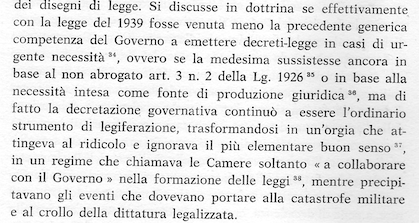 It means "legalized dictatorship".
Fascism could be considered a "legalized dictatorship" because it basically acted like a dictatorship without formally breaking the laws of the time.
For instance, as described in this article, they used "decreto legge" - which was meant as an "exceptional" tool to pass urgent laws quickly and with less opposition - as their standard way to pass laws.

Not the answer you're looking for? Browse other questions tagged translation meaning or ask your own question.