How to translate I'll sing for my supper?

I think that a very strong way to answer a phrase like "Don't think this is going to grant you any special treatment" or the like, is "I will sing for my supper, I don't expect it for free"

At least, I like this English expression very much.

Is there an equivalent expression in Italian? Even though I am Italian I did not find anything like it.

Keep in mind, however, that it has some cultural history (detailed below) not to mention alliteration, that one can't easily duplicate. There is also something about it that is slightly archaic.

To sing for one's supper, meaning:

Work for one's pay or reward, as in Entertaining visiting scientists is part of the job; you know I have to sing for my supper.

This metaphoric term alludes to wandering minstrels who performed in taverns and were paid with a meal. First recorded in 1609, it gained currency with the familiar nursery rhyme, “Little Tommy Tucker, sings for his supper” (c. 1744).

Here is the text of the nursery rhyme, "Little Tommy Tucker, sings for his supper 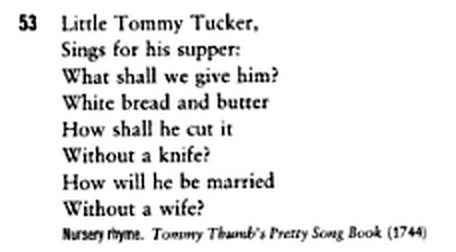 The saying was further popularized with a musical number "Sing For Your Supper" from the "The Boys from Syracuse" in 1938.

Not the answer you're looking for? Browse other questions tagged idioms english-comparison or ask your own question.

10
Is ‘cosare’ equivalent to the generic use of ‘do’ in English?
7
How would I translate "He makes the language sing." into Italian
6
How to translate bank address details in Italian?
11
Filler-words in spoken Italian
4
What's the meaning of "pettinarsi a farfalla"?
1
Could a translation error lead to squares to not be considered as rectangles?
3
How to translate cool, nice, great in Italian
4
How to capture a possible figure of speech with "E se io fossi vago" in translation?