How do Italians customarily insert uppercase Italian vowels with diacritics with an Italian keyboard on a PC?

How do Italians typically resolve the issue of entering uppercase vowels with diacritics on a PC (Windows or Linux) with an Italian keyboard, given that these are missing from the printed text appearing on the keys and by default cannot entered via Shift (also known on Italian keyboards as the Maiusc key), Ctrl, Alt key combinations (unless some modification is made to the default layout with the Microsoft MSKLC application)? On Windows 7 I have tried both the Italiano and the Italiano (142) keyboards and both lack this functionality by default. I cannot understand why those who created these keyboard layouts, however long ago that may be, never thought about adding key combinations for inserting uppercase Italian vowels with diacritics.

Using the Italian keyboard layout on Linux (at least on Ubuntu 14.04), you can get the uppercase versions by engaging caps lock. For example, to type É, I turn on caps lock and press shift-è. I'm not sure whether this works on Windows and Mac, though.

In practice, I've noticed that Italians will often append an apostrophe in place of a grave accent when the diacritic is not available, or is too inconvenient to produce: 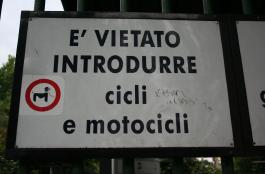 On the PC, special Italian characters, many of which are not present on Italian keyboards, can be inserted using the following ALT codes. To use these, first ensure that the Num Lock key has been pressed once so that it has become enabled (this key is also known as the BI Num key on Italian keyboards); usually a green LED above the keyboard will light up once this key has been enabled. Next hold down the Alt key, type the four-digit numeric code, then release the Alt key. Here is the list:

The Euro (€) symbol can also be inserted via the AltGr+e and AltGr+5 keyboard combinations.

In Microsoft Word as well as in LibreOffice, when lowercase letters such as è are inserted at the beginning of a sentence the software automatically converts them to uppercase letters such as È. In both software products it is also possible to switch between title case, all caps, and lowercase, by highlighting the given text and entering the SHIFT+F3 key combination. This significantly reduces the need for being able to enter uppercase letters with diacritics directly via the keyboard when using these software products.

It is also possible to produce these characters inside other software products including text editors by installing Microsoft Keyboard Layout Creator and using it to assign special characters to unused keyboard combinations (e.g. combinations resulting from pressing the AltGr key in combination with other keys, given that AltGr is present on Italian keyboard but on Windows most of such combinations do not output any characters by default).

In support of one of the given responses which mentions that Italians will often append a diacritic to a vowel rather than including both as part of the same character when conventient to do so I have taken a few pictures in an Italian supermarket where two items have been spelled out using (a) an appended apostrophe/quote character acting as a grave accent and (b) an appended backquote acting as an acute accent: 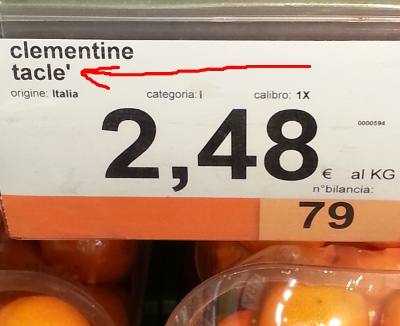 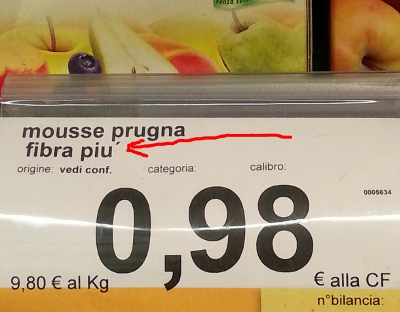 I have also found the following samples of written text in Italy: 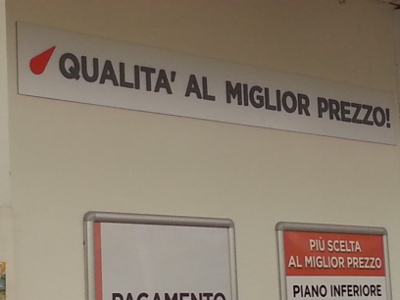 In the above picture the word being spelled out is qualità, but IMHO given that all letters are in uppercase, in order to make the text stand out even more, the person who wrote the sign decided to append an apostrophe at the end instead of a grave accent, so there are also marketing reasons.

Another example is the name of the chain of Italian supermarkets Alí (which has now been operating in the country for at least thirty years) and has its last vowel spelled with an acute accent (although, as mentioned, it is possible to use this as less common alternative to the grave accent on written i and u vowels appearing at the end of the word): 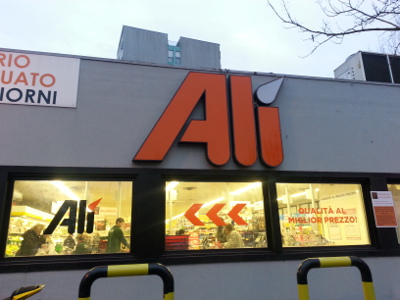 Finally, there is one finer point to mention. The people who came up with the Unicode standard, which is a very well known standard in the computer world and can be used to represent all characters, diacritics, etc... in every language in the world, has noticed that if Unicode is to truly represent languages internationally then the forward quote (') and backquote (`) found on all standard US ASCII keyboards (and where the forward quote has also been always also used as an apostrophe when composing English plaintext) need to be considered as separate characters from the apostrophe, grave accent, and acute accent, so much so that these five entities have received their own Unicode encodings (as standalone diacritics), with three types of double quotes (left, right, and neutral) also receiving their own characters:

To type the above Unicode characters on Windows, hold down the Alt key, hit the + on the numeric keypad key, then type the hexadecimal digits (e.g. 201c), then release the Alt key.

If you simply cut and paste these Unicode characters, you will see that they are all different. So, my guess is, one could write the more proper variants:

or, alternatively, especially in those cases where for marketing purposes one may want the letters to stand out:

and the latter form would not be entirely wrong, since, technically, the appended diacritics are grave and acute accents and not apostrophes (although I do admittedly think this would indeed look somewhat funny inside proper printed texts)!

Although my original question had to do with the use of Italian hardware keyboards on Windows, for completeness, it is also worth mentioning that on Windows users of US hardware keyboards can easily add support for entering Italian vowels with diacritics adding a US International keyboard in Control Panel -> Regional and Language Options -> Keyboards and Languages -> Change Keyboards... -> Add... -> English (United States) -> Keyboard -> Check US - International -> Apply -> OK, and the keyboards can then be switched from the switcher in the lower-right hand side of the windows taskbar. With this keyboard one can type:

Windows: I guess there's only one way to do it (corrections are welcome): ALT+Numerical keyboard combination. For example È is ALT+0200. Since the moment there are very few cases that requires diactritics uppercase and È is the most common, learning the combination will do the job easily even if most people will write: "E'". Programs like Word should correct it automatically (Writer from Libre Office does), while if you use other editors you should check it. If you're writing a web page, there's a code: &Egrave; (È) or &Eacute; (É) that you should use always anyway for compatibility.

Linux is an alien world to me, so I don't know.

Maybe I'm missing the point here, but if you set your language to US International, and I assume various others, this is easy.

Various other combinations are available. I don't know about using the Italian language profile itself.

When using Linux you may use Compose Keys and map the right control, for example, to be the Compose key. This can be done under Keyboard/Keymapping settings tool of your Desktop Manager. Then you'll be able to use several default mappings as well as create your own set of key mapping. I was not able to use Compose Keys on OS/X although they work well on FreeBSD.

In my experience, I have found that many people simply resort to E' for È/É, A' for À, and so on. However, there are also some OS-specific tricks:

Mac: if you long-press a vowel, a menu appears, asking which letter to enter (eg. long-pressing E gives È, É, and possibly other characters). Alternatively, one may use the Character Map.

Some also use the US International keyboard.

When using Microsoft Windows, the standard Italian keyboard layout does not allow one to write 100% correct Italian language, since it lacks capital accented vowels, and in particular the È key. The common workaround is writing E' (E followed by an apostrophe) instead, or relying on the auto-correction feature of several word processors when available.

As you seem to be interested in writing in Italian with that already has a different set of characters written on it, I recommend you to use a different layout where you have dead keys for diacritis, such as a Portuguese or Spanish layout.

PS: I cannot understand the reason, either. Specially when already providing an Alt Gr key with little use. (On Linux you will probably find many undocumented Alt Gr combinations adding extra characters).

To enter diacritics in Windows I would suggest this keyboard layout. Certainly, you can create a "layout of your dream" :) with Microsoft Keyboard Layout Editor. However it's a bit boring, so I'd stay with the first option (which essentially is the product of such a generator).

With this layout you could enter lowercase diacritics with <right-alt>+<base_letter> and uppercase with <right-alt>+<shift>+<base letter>. I use this layout when I write Spanish (huh, ¡Español! :) or e.g. Ágil and found it the most conventient solution for Windows, especially when you need to do a lot of programmings, and thus have to enter "strings" or 'c'haracters all the time.

In Linux which is my primary desktop OS, I use the following xkb settings:

This allows me to write English with all ' (quotes), " (double-quotes), and ` (backticks) as usual plus diacritics like á or ¡ by pressing <CapsLock>+<base_letter> (it's more convenient than <alt>+<base_letter>, because <alt>+<letter> are often used for shortcuts). Also I have a completely separate layout for Cyrillic (Russian + sometimes Ukrainian), turned on and off by left <ctrl>+<shift>

Personally, I use the US-International layout, which has the benefit of using the Alt-Gr key to negate the need to switch between different keyboard layouts. It works correctly with Caps Lock and with shift (the letters are correctly converted to their uppercase equivalents). It also has the added advantage of not requiring you to learn new layouts when learning a new language with diacritics such as German or Spanish.

A drawback is the "dead key" feature of US-International, which is especially grating for programmers, who use the dead keys frequently in programming. To prevent this, you can download the custom keyboard layout here which disables dead keys.

French here. We have accents as well, and academic rules state that you don't have to put accents on uppercase letters. While handwriting, it can be diffidult to put accents, as it was on machine typing. The exception was likely made due to the uselessness of accents on first-letter uppercase.

However, you have several ways to put accents. First is to let your word processor auto-upper the letter. Then you have the ctrl-shift-u shortcut. And finally, the alt codes.

With an Italian keyboard, if you press alt+9, you get a combination that lets you insert a grave accent over any vowel (even uppercase); alt+8 gives you the acute accent. But most people don't bother; they just put an apostrophe after the uppercase vowel (especially E', to distinguish it from the conjunction.

The Spanish International keyboard for Windows allows both types of accents by either pressing the tilde key (and releasing) for àèìòùÀÈÌÒÙ or holding down the Alt key and the appropriate keys to produce áéíóúÁÉÍÓÚ. I find this is the simplest method for Italian and Spanish.

Not the answer you're looking for? Browse other questions tagged accents letters typography or ask your own question.

6
Difference between ò and ó?