Why are these two conjugations of 'viaggiare' irregular forms?

Whilst looking up the verb conjugations for viaggiare on WordReference, I began thinking about this: 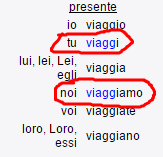 What I don't quite understand is why these would be considered irregular forms. I can understand that the second-person singular conjugation would be, but why is it the case for the first-person plural? Would it be due to pronunciation or is there something else I'm missing?

Is there an explanation as to why these are considered irregular?

The forms viaggi and viaggiamo are irregular because they would be formed (tu) viaggii (noi) viaggiiamo if you were following the normal rules of conjugating present tense verbs.

Note, however, that sometime verbs do double the i, but only when the -i is stressed in the 1st person present indicative: i.e. scio, invio (I send), spio (I spy). The correct conjugation for these is (tu) scii (invii, spii).

No, they aren't irregular forms. The verb belongs to the first conjugation (in -are), the same as amare

The only difference is the presence of the i, which is just an orthographic device for telling the palatal pronunciation of the preceding (geminated) g. So this is a very different situation than cambiare, where there is an i in the root of the verb. However, the final realization is the same: in both cases the desinence remains -iamo; in both cases the i in the desinence is absorbed: it's not really heard in viaggiamo and it's not doubled in cambiamo.

It's a general rule in Italian that pairs of non-tonic identical vowels contract to a single one: the plural of olio is oli and, similarly, any desinence starting with i is absorbed:

In the case of viaggiare, the “purely orthographic” i is removed when there is one in the desinence, which avoids any doubt in the pronunciation: so tu viaggi and noi viaggiamo.

Somebody supports writing plurals of words ending in the diphthong -io with a double i. Somebody disagrees. But viaggio doesn't end with a diphthong, so there should be no doubt that the graphic i is dropped when it doesn't serve its purpose any more because a phonetic i is present.

14
Why are 'di' and 'dal' interchangeable in some cases, while they aren't in others?
7
How come there are two gender forms, "tavola" and "tavolo"? Which one is proper?
7
Why is the auxiliary 'avere', as opposed to 'essere', used when conjugating the verbs 'camminare' & 'viaggiare'?
6
How and why did avere get the 'h' in some present tense forms?
5
Why are the definitions of "fottere" so biased towards the man?
5
Why are the 2nd/3rd singular forms of present of « potere » irregular?
1
How would you describe "a" in these two sentences?