This phrase has appeared several times while I was looking up the word tondo.

Really? Or is it just a repetitive sentence that sounds nice in Italian to calm someone or some animal down?
Why would you say this? What would be its closest meaning? Are there other phrases like this that are commonly used? Is THIS a commonly used phrase? 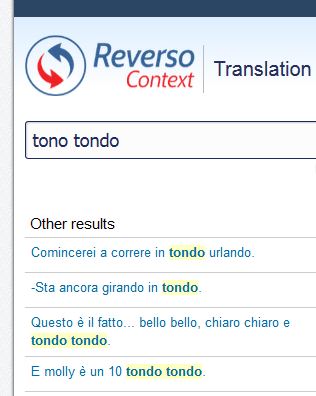 Okay - I have been looking further... I am also finding the phrase chiaro e tondo which seems to mean clear and simple, or bluntly or pure and simple. Could it be that the original phrase is just "verbal filler"?

Given the clarification in the comments, I am quite confident that this is simply a case of repetition for emphasis. The sentence in question is

(Incidentally this sentence sounds a bit weird. It's not wrong but I would not consider it an example of "good Italian". Apparently it comes from some subtitle but I was unable to track down the movie in question. I have to assume that there is some visual context that explains it)

My interpretation is that it is a modification of the following

That we can roughly translate as

This is the long and short of it, without any possible ambiguity

(From chiaro e tondo, which means plainly, without mincing words, unambiguously, with an added bello for emphasis)

Just to add to your initial motivation for looking up this word: tono tondo is not a common Italian turn of phrase either. I can imagine using it to discuss some singer or musician (as in Her voice has a beautiful, round, tone in that passage) but that's about it, and even this is fairly uncommon.

Not the answer you're looking for? Browse other questions tagged idioms or ask your own question.