Is pensare/credere che always used with subjunctive? Isn't there any exception to this rule, even if you are 100% sure that your statement is true and that you say credere –instead of, say, I'm sure– just by courtesy?

The verb credere, like all Italian verbs implying a desire, an expection, a fear and so on, usually requires the subjunctive mood. Among those listed by Serianni (XIV.48-54):

and so on. On the contrary, verbs denoting a perception or a judgement require the indicative mood:

The verb pensare is instead one of those admitting both moods, with different shades of meaning. Taking again from Serianni: pensare che with the indicative mood has a meaning akin to riflettere (e pensare che erano costrette a cucir loro le camicie, Palazzeschi), while with the subjunctive means something like supporre (mi parve una sciocchezza pensare che qualcosa potesse andare male, Fondagni).

Something similar holds for some other verbs, such as:

Nevertheless, apart for the careless use of the indicative in place of the subjunctive already remembered in the comments, there are occasions where the moods are exchanged. For instance, a subjunctive may be used in lieu of an indicative to express a speculative scenario (dicono che sia stato fucilato) or in negative sentences (non ricordo che avessimo mai litigato). Vice versa, the subjunctive mood lacking a future tense, that of the indicative mood is used: credo che potrete farmi un piacere.

As explained by @DaG, the rule is that one should use the subjunctive with "credere che". However, according to Vittorio Coletti in the book Grammatica dell'italiano adulto (Il Mulino, Bologna, 2015), when the relative clause refers to a future moment with respect to the independent clause, one can use the "indicativo futuro" tense instead of the subjunctive:

And, if the sentence refers to the past, one can use the "condizionale composto" tense instead of the subjunctive:

No, credere che and pensare che are not always followed by the subjunctive mood. There are cases where using the indicative mood is possible or even obligatory. Grande grammatica italiana di consultazione, vol. 2 says about this: 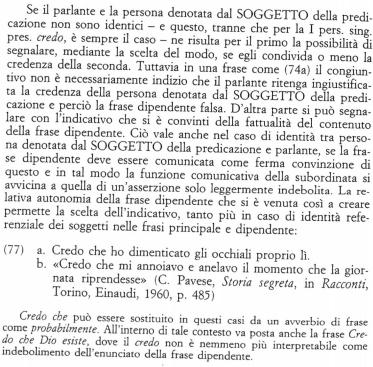 If the speaker and the person denoted by the subject of the predicate are not identical — and this is, except for the 1st pers. sing. pres. credo, always the case — it opens, for one, the possibility to indicate through the choice of mood whether or not the former shares the belief of the latter. […] On the other hand, the indicative mood can also express one’s conviction of the truth of the dependent clause’s content. This also applies in cases where the person denoted by the subject of the predicate and the speaker are identical, should the dependent clause need to be expressed as their firm conviction. The dependent clause’s communicative function thus approaches that of an only slightly weakened assertion. The relative autonomy of the dependent clause that emerges in this way allows the choice of the indicative mood, especially in cases where the subjects of the main and dependent clauses are referentially identical:

In these cases, credo can be replaced with a sentential adverb such as probabilmente (“probably”). The phrase Credo che Dio esiste (“I believe that God exists”) should be mentioned in this context, wherein credo can’t even be interpreted as a weakening of the dependent clause’s statement anymore.

It goes on to say:

However, the indicative mood can also be used to express, almost quote, something as somebody else’s firm conviction:

The indicative mood is obligatory after imperatives and corresponding expressions:

The book explains later on that the latter also applies to pensare:

An example of this can be seen with the verb pensare in this panel of a comic: 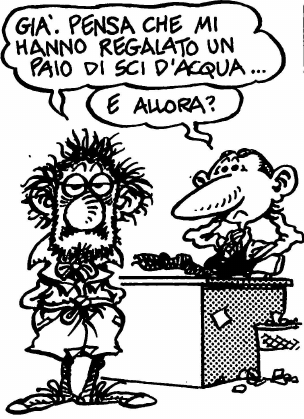 “Imagine that, I got a pair of water skis as a gift.”

The indicative mood is also common after complex predicates of the type dar a credere, far credere (“to make believe”), especially to get across the subject’s intention to convince someone of the (presumed) truth of the dependent clause:

An example of this can be found in Niccolò Amenta’s La Fante:

… mi vuoi far credere, che non vuoi maritarti? — …you want me to believe that you don’t want to get married?

The book goes on to explain that the indicative mood also appears after non credere, especially if, contrary to what the subject of the predicate believes, the content of the dependent clause is true:

(Will expand this later to also cover pensare.)

A subjunctive is always needed. The only exception to this rule is in spoken language, when answering a question:

It's not really a complete exception, because the subjunctive is implied by the question. But it's never repeated, when talking.

Not the answer you're looking for? Browse other questions tagged subjunctive-mood or ask your own question.