Is "mela" somehow related to "melanzana"?

I note in this context, that "manzana," which seems like a "cross" between mela and melanzana means "apple," in Spanish, a closely related Romance language.

And the French use "pomme de terre," that is "apple of the earth" as their description of potato.

On the other hand, "eggplant" is translated "aubergine" in French and "berenjena" "in Spanish. So I would expect the translation to be an Italian equivalent, something like "berengina." Except that it is not.

Here is a dictionary link that gives the definition, but makes no mention of apple.

So is there a context where "eggplant" is reasonably translated (in a non-English language) as "apple plant?" And is this actually the case in Italian?

According to Treccani dictionary, the word "melanzana" comes from Arabic "bādingiān" crossed with "mela". This is explained with some more detail in this La Stampa article. Latin word "mālum" means fruit and from this was derived the word "mela" or "melo" which, in the Middle Ages, was used to construct the name of some fruits: "melagrana", "melacotogna", "melangolo", "melone". In particular, "mela-bādingiān" gave rise to the word "melanzana".

According to Merriam-Webster dictionary, the Spanish word "manzana" comes from from Old Spanish "mazana" or "maçana", that derives from latin "māla Matiana", which comes from the name of Gaius Matius, a 1st century b.c. Roman writer on gastronomy.

A Catalan word for "eggplant" is "albergínia". According to Gran Diccionari de la llengua catalana this word also comes from Arabic "al-bādingiān" (note that "al" is the Arabic article). And according to this source and this other one, the Catalan term is at the origin of French and English "aubergine".

Look at the web version of the Vocabolario Etimologico della Lingua Italiana by Ottorino Pianigiani.

For Melanzana see at: http://www.etimo.it/?term=melanzana&find=Cerca 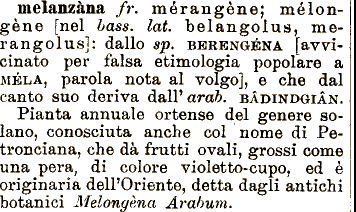 Not the answer you're looking for? Browse other questions tagged etymology or ask your own question.

1
Is the expression "arco di Noè" (used in Sicily for "rainbow") related to "L'arca di Noè"?
6
When and how did the letters E and I "swap", compared to other Romance languages?
6
What's the origin of /ʎ/ sound of "gli"?
4
Is "Cafeé und Thée Logia" partly Italian?
6
Why is that the future/conditional stem of «essere» is [sar-] instead of [esser-]