What are the meanings of these convincing phrases and where exactly do we use them in Italian?

The above words have the same meaning which is "come on". I like to know why there are so many words for just one phrase "come on" in Italian. What I want to know is their precise contexts. Here are some examples that I have found: 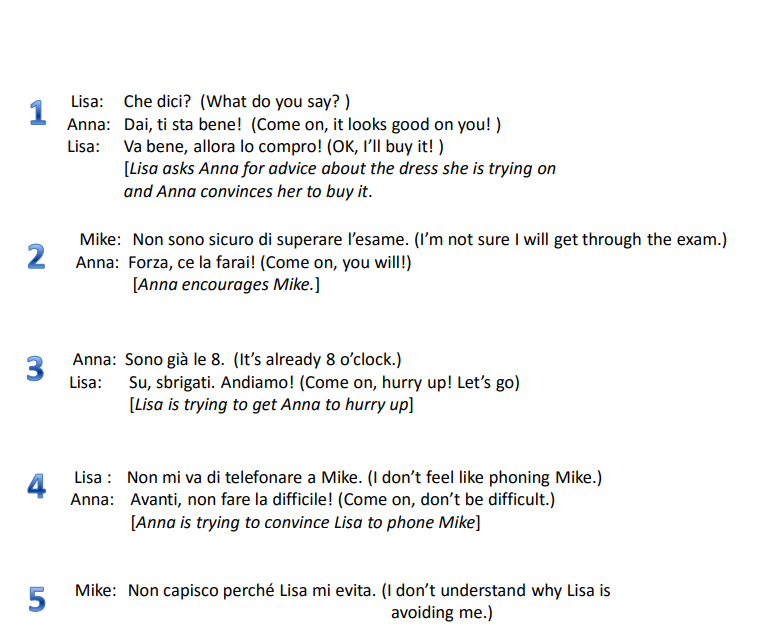 I would say that something like "dai" is probably the most generic. I can imagine it being used in all those sentences correctly.

Coraggio literally means courage, so I would imagine it more as being used in a situation when you need to build up a bit of "courage", even in a metaphorical way.

"Su" literally means "up". It can be used as to cheer up someone, or to spur someone to do something. So, if I was asking a friend about how a dress looks on me, and she used "su", that would feel more like "just take this dress and let's finish this, we've been around shops for three hours already!".

"Forza" literally means "strength". I can imagine it being used, again, when inciting someone, ("forza, ancora qualche minuto di cammino e siamo arrivati" -> "Come on, some more minutes of walking and we'll get there"), or to encourage. Actually, "Coraggio" would work exactly the same in this context, especially if the person you're speaking to really looks very tired. And also "su" and "dai" would be ok, although especially the latter would probably implicitly express "stop complaining". "Avanti" I think transmit more the message of "go on", which to be fair would make it suitable for this context.

There are also many other words that can be used, as someone already pointed, and I would say that the differences in using some more than others may be also regional, or even just personal choice actually more then anything else. Also for these words I guess the intonation would matter as well to convey the message.

They are all similar interjections, which can be used interchangeably as also others like "orsù!, orvia!, ovvia!, suvvia!, via!, animo!, forza!, alè!". Now I make some examples. If you want to exort someone to move on, expecially after a failure, you prefer to use "coraggio": "Coraggio, su, andiamo avanti, non è la fine del mondo". If you want to wake up someone, you would not prefer to say "coraggio", but rather "su, dai, muoviti, è ora di andare!". If you are in a hurry because someone has delayed your task, you won't say "coraggio", but rather you would say "dai, su, avanti! muoviti che siamo in ritardo".

You can use 1,2,3,4 equally. "Coraggio" is something more like a expression used to build up confidence, courage etc. like "coraggio, ce la farai" ("You can do it"). In this case you can use "forza" too. Hope I explained this decently. Anyway you can find someone that will explain this much better, I'm an engineer so you know, language is not my highlight, even if that's italian since I'm italian ahah.

EDIT: acually I was thinking about "coraggio" and how sometimes you can use it like 1,2,3,4. Like, you are tired and walking home and your mate is so slow so you say "omg, coraggio I want to get home asap". Not used so much but you could. Usually we just say "dai cazzo muoviti" that's it ahah

Not the answer you're looking for? Browse other questions tagged word-usage word-meaning or ask your own question.

10
"Al riguardo di" and "a riguardo di"
7
Any etymological relationship between the Italian "eh" and the (mostly Canadian) English "eh"?
3
Words describing being arrogant but in a positive way?
5
Ways of saying "You are welcome"
5
Modal Verbs and Changes in Meaning
11
Filler-words in spoken Italian
3
Why the use of "in" in Italian question titles?
3
Do "finché" (and "fino a che") mean "until" or "as long as" (or both)?
1
What's the meaning of "aeroportuali e portuali" in this context?